People often ask us: “Krampus, what’s the difference between fermented kanna and unfermented kanna?” Well after months of extensive testing, we’ve finally put our wrinkly finger on it … I think. Here goes: 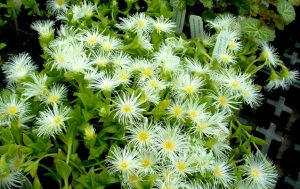 Kanna traditionally goes through the process of fermentation, which gives it new character – so to speak, for about a week. From there it is left to dry in the sun for a couple days. One thing fermentation does is enhance the plant’s flavor, though if you ask us, it still isn’t the tastiest herb by far. In our experience, fermented kanna delivers exceptional mood enhancement and remarkable euphoria. Mental clarity, energy, and eventual relaxation each rank at about 3 leaves on the Krampus rating scale.

Unfermented kanna is basically the plant as nature intended it to be – fresh from harvest and dried without the slightest alterations. While fermentation is historically known to enhance an herb’s potency and benefits, that doesn’t necessarily mean that the raw, unadulterated plant should be sold short. Despite somewhat lacking in mood elevation, our test results find that unfermented kanna rocks in both the energy department and mental clarity. In fact, that laser-like focus is the very reason we chose to use this brand of kanna in our U-phoria blend.

So which type of kanna is the best? Fermented kanna or unfermented kanna? We’ll break it down like this: If you’re after mood elevation and chillaxing, fermented kanna may be the best option for you. If increased energy and clarity is your Huckleberry, consider giving unfermented kanna a try. Or pair them up and see what kinda synergy you get from combining the two. At the end of the day, you’re the winner because both are awesome in their own special way!

I have been on opiates for 20+ years. Diagnosed with Lupus when I was young, it’s always been an uphill struggle to find ways to deal with pain. Recently I switched from pharmaceuticals to natural solutions. I had these seeds on my nightstand, and one day I was in rare form. I hurt so bad I couldn’t even brush my hair (the scalp felt like the brush was a gator mouth). I was trying everything I knew to try, and the seeds crossed my mind. That night I ate only 1/2 a seed and felt AMAZING! I took a whole one before bed the following evening to make sure it wasn’t a fluke. I slept for a solid 10 hours without awakening whatsoever. I had been having a difficult time sleeping, and due to these seeds, it takes my pain level from an 8 to a manageable level of a 2 of 3, and I have not experienced a sleepless night since.

Now I use them almost daily. For me, 1 large seed or 2 smalls seeds do the trick. If I suck on the seed until it softens, the potency is much stronger versus just swallowing them (although either way works). I am incredibly grateful these seeds crossed my path. If the pain struggle is real, and you have resistant pain? Trying these are a must!